Our adventure in Arequipa, Perú, has ended, and so I would like to sum up our experience there in a few words (pocas palabras).

Rocoto Relleno — Possibly the most common dish in Arequipa, this spicy stuffed pepper is delicious.

San Camino Market — The largest market in the center of town is a great place to find bargains and cheap produce.

Alpaca Yarn — Perú is famous for this soft yarn.

Ceviche — Though Arequipa is two hours from the coast, this fresh fish that is marinated (or “cooked”) in lemon and/or lime juice is a staple.

Traffic — Arequipa has grown rapidly in the last 10 years, and the roads are not well equiped to handle the increase in traffic.

Papaya and Mango — My two favorite local fruits, and I will miss them.

Sun — Shines virtually every day this time of year.

Inka Terraces — Farming the Inka way is still commonly done thanks to the many terraces left behind by this native community.

Potatoes — There are seemingly dozens of varities.

Combis — Vans and buses packed with commuters that clog the streets.

Aji — The national spice of Perú, and in different varieties.

Drinkable Yogurt — Many varieties and in large containers, however low-fat and low-sugar versions are scarce.

Walking — Without exaggeration I walked well more than 100 miles a month while there.

Menu del Día — The daily lunch menu of soup, entre, and beverage, all for as little as $2.

Vicuñas — The smallest of the camel family, these beautiful animals yield the most expensive yarn in the world.

Inka Cola — It’s yellow and tastes like cream soda, but it’s the most popular soda in Arequipa.

Catholic Church Buildings — They are all over town, including monasteries, parishes, and the grand cathedral that anchors the central square.

Bottled Water — That’s all I drank for two months after my early bought with Montezuma’s Revenge.

Pigeons — All over town.

Vea — Kind of like a mini Walmart, and my favorite grocery store.

Taxis — They dominate the streets.

Narrow Sidewalks — Always an adventure, but I won’t miss them.

Maca — This root vegetable that may only be found in Perú is purported to be a wonder food.

Club International — This sporting and exercise facility close to the center of town sits on about 5 acres right next to the river and it has just about everything you can imagine.

Coca — The leaves from which cocaine is made is all over town and used in teas, snacks, etc. … I would have loved to try it, but didn’t want to risk failing a job-related drug test back home.

Misti — One of the volcanoes that tower over Arequipa, it is your constant companion while there. 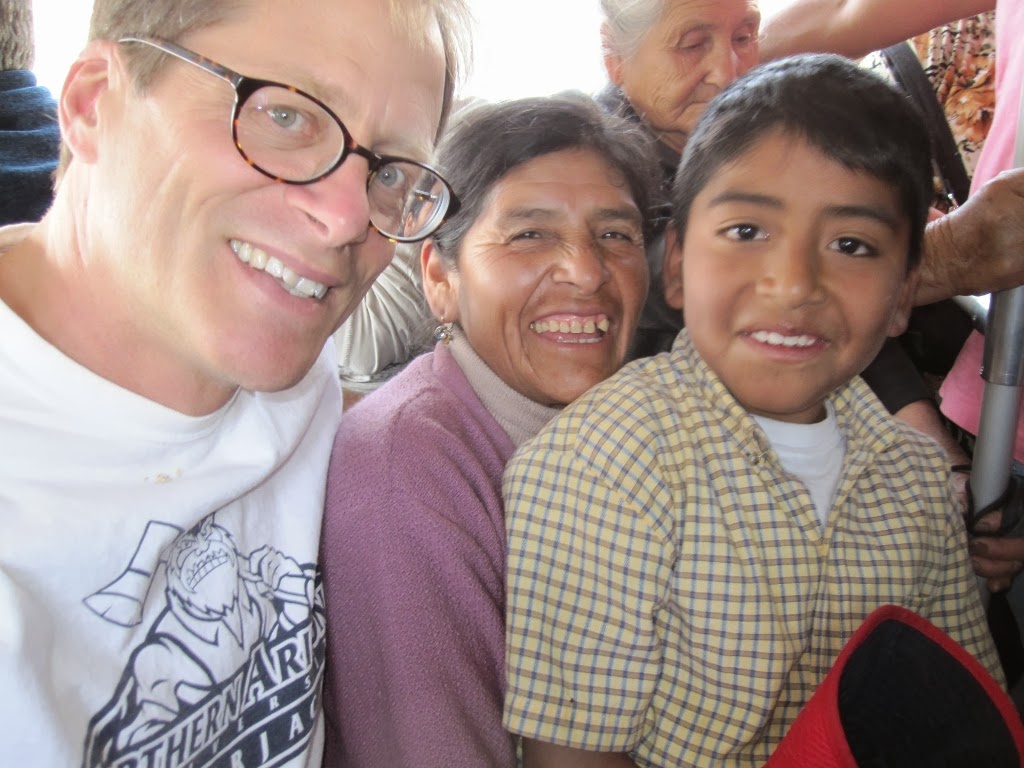 Sep
24
2013
by admin | 0 Comments
My Dad will be 84 years old in a few months, and as far as I know he still cuts hair occasionally … which means that he has been a barber for close to 60 years.
Obviously, I didn´t have to pay for a haircut until after I left home at age 18 to go to college, but even then I timed my trips home for a few years to save some money by getting my hair cut while I was in Toledo.  Nonetheless, my trips back to Toledo soon became infrequent, and as I moved from Ohio to Tennessee to Texas while completing my college and graduate studies, I would always look for the cheapest haircut I could find.
In 1987 about halfway through my studies in Abilene, Texas, I found a barber who cut my hair for $4.  That old feller was 90 years old if he was a day, and I don´t really know if he only charged me $4 because his hands shook so bad or because he had not raised his rates in quite awhile.  In any case, he hacked me up pretty bad.  It just so happened that I was in Toledo not long after getting that haircut, and my Dad took one look at me and said, “How much did you pay for that haircut?”  And after I told him that I only paid $4, he said “Well you paid $4 too much!”  So then my Dad kindly fixed my haircut at no charge.
That $4 haircut remained my king of cheap haircuts for a long time, and as time passed by it looked like it would never be beaten and remain the all-time cheapest haircut … until I got my haircut today in Perú.  Today I got my haircut near the central market for only 4 Peruvian soles, which on the exchange means that I paid about $1.43.  Now that´s what I´m talking about!
I may have received a comparably priced haircut about 3 years ago while in Guatemala, but as I recall it was about $2.50 on the exchange.  But from now on, $1.43 for a haircut is the new benchmark and it will be tough to beat, and my Peruvian haircut was a full professional haircut that included whitewalls and a shaved neck with a brand new blade.  The barber shop, or peluquería, looked like a space that had been carved out of the side of a building, but who cares!  The peluquería had two barber chairs, and even some seating for those waiting for a haircut, and there was also barber-shop-like banter going on between the other peluquero and his client.
Of course, if I had paid for the amount of hair he cut off, I probably would have paid more.  When I sat down in the chair the peluquero asked me (as all good barbers do) how I would like my hair cut, and I told him “solo un poco” … which to me meant I wanted only a little taken off.  But evidently he thought that I meant “leave only a little” because he kept cutting and cutting and cutting.  At one point I could feel myself tense up while thinking, “Please stop snipping,” but I quickly realized that there was nothing I could do at that point, so I relaxed and I resigned myself to fate.  When he was done I gave him a 50% tip, which means I paid him 6 Peruvian soles which still is only $2.14 on the exchange.
Before I left I whipped out my camera and I held it at arm´s length to take a photo of me with my Peruvian Peluquero.  Unfortunately, I forgot to ask him his name, but he will forever be remembered by me as the provider of the cheapest haircut I ever had … at least the cheapest I can remember having to pay for.  I hope that my Dad does not have to fix it.

Montezuma was Emperor of the Aztec Empire in modern day Mexico from 1502 to 1520, and he was in power when the Spanish began their conquest of the Aztec lands. And since no one likes to see their country overrun by foreign invaders, evidently Montezuma is committed to forever seeking revenge on us foreigners who invade or just VISIT what was once Aztecan.

Moreover, he seems to have extended his “revenge zone” throughout all of Mexico, Central America, and South America … and I expect that this revenge zone could also include states (or parts of states) that were once part of Mexico, including the entire states California, Nevada, Utah, Arizona, New Mexico and Texas, as well as parts of Wyoming, Colorado, Oklahoma and Kansas.

That´s a wide swath of land!

So I´m not sure what I did to trigger Montezuma´s wrath all the way down here in Arequipa, Perú, which is at least 3000 miles away from where Montezuma reigned, but evidently I did something to really piss him off.

I have done SO MUCH reading this week on the can. I´ve read an entire Spanish-language National Geographic Magazine … I can tell you about recently discovered secrets of the Mayas, about the life of a lion in Tanzania, and about the rise of the sugar industry throughout the world. I´ve read backwards and forwards the brochure on Arequipa´s Cathedral Museum. I´ve read the bulletin from last Sunday´s Catholic mass at least 3 times. I´ve listened to audiobooks on my iPod, and I´ve even prepared English lesson plans. This has been a very productive week, and all this reading is really strange for me because I have not been a voracious reader like my lovely wife, but for the past week I would say that my reading prowess has been on par with the best of them.

The other thing is that this cataclysm has been great for my diet. A few years ago I finally lost the extra 15-20 lbs that I had been carrying around for several years, but before coming to Peru I was inching back toward the 180s. Not to worry … my buddy Montezuma came to the rescue (or revenge). I didn´t even want to look at food for about 3 days, and when I dared to put even a few morsels into the system, I gurgled like a bowling pot overflowing on the stove … I bubbled like lava bubbling up from a hot crater … I rumbled like a locomotive trying to cross a mountain vertically … I growled like a tiger who hasn´t eaten in a week. I was afraid that I might wake up the neighborhood! Not only did I gurgle and bubble and rumble and growl, but I gave it all I had! If there was anything in me, it´s now long gone! I probably could have walked into a colonoscopy clinic and convinced them to give me the procedure on-the-spot. Surely I weigh less now than when I arrived 3 weeks ago, and I´d like to thank my buddy Montezuma for all his help.

Okay, Montezuma, you´ve had your revenge on me … in spite of the fact that I never did anything to you … please note that I am just down here teaching English, that I´m trying to HELP PEOPLE, and also doing a little exploring … and I might suggest that this little game of revenge you´ve been playing for God-knows-how-many-centuries is getting a little old … and I´d like to mention that there´s a little thing called karma, you know … that perhaps it´s time for you to start collecting a few reading materials yourself, eh? … and even though you may not want to hear this, I think that you´ve been looking a little pudgy around the waistline lately … so it is high time that you shave off a few of those donuts … how ´bout a little of your own medicine? … and we´ll just see if you TOO can keep a positive attitude while walking through the fire … so whatchu think of that _ _ _ _ , Big Boy?

My Journey to Peru