We met through a dating service, which at the time was called At The Gate, but which is now called Green Singles. This was before the age of widespread Internet usage, and the dating service would place little ads in the back of certain magazines. For $29 you could become a member and receive the master listing of all available singles, and then spend a $1 for each letter that you sent to someone through the anonymous PO Box. I read her profile and was interested (SWF, likes to camp, etc.), she lived in the same area of the country, and so I sent a letter to her through the system.

We met at the Au Bon Pain (“Oh Good Bread”) in L’Enfant Plaza in Washington, DC. We sat at a table and drank sodas until the restaurant closed, and then went outside to sit and continue the conversation. It was a brief visit because I had to hurry and catch the last commuter train to the small town where I lived.

4 weeks later we were talking marriage, which was pretty extraordinary since both of us were 37 years old, never married, and at that point thinking that marriage was probably not in the picture … and then bam!

When I speak to her, I usually call her Sweetie. But when I talk about her, I often call her My Lovely Wife. I also like to introduce her as My Lovely Wife, and she appreciates that.

Charmingly or exquisitely beautiful: a lovely flower.
Having a beauty that appeals to the heart or mind as well as to the eye, as a person or a face.
Of great moral or spiritual beauty: a lovely character.
Here we are a few years ago: 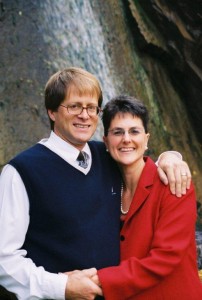 Things I Will Miss and NOT Miss about Cuenca